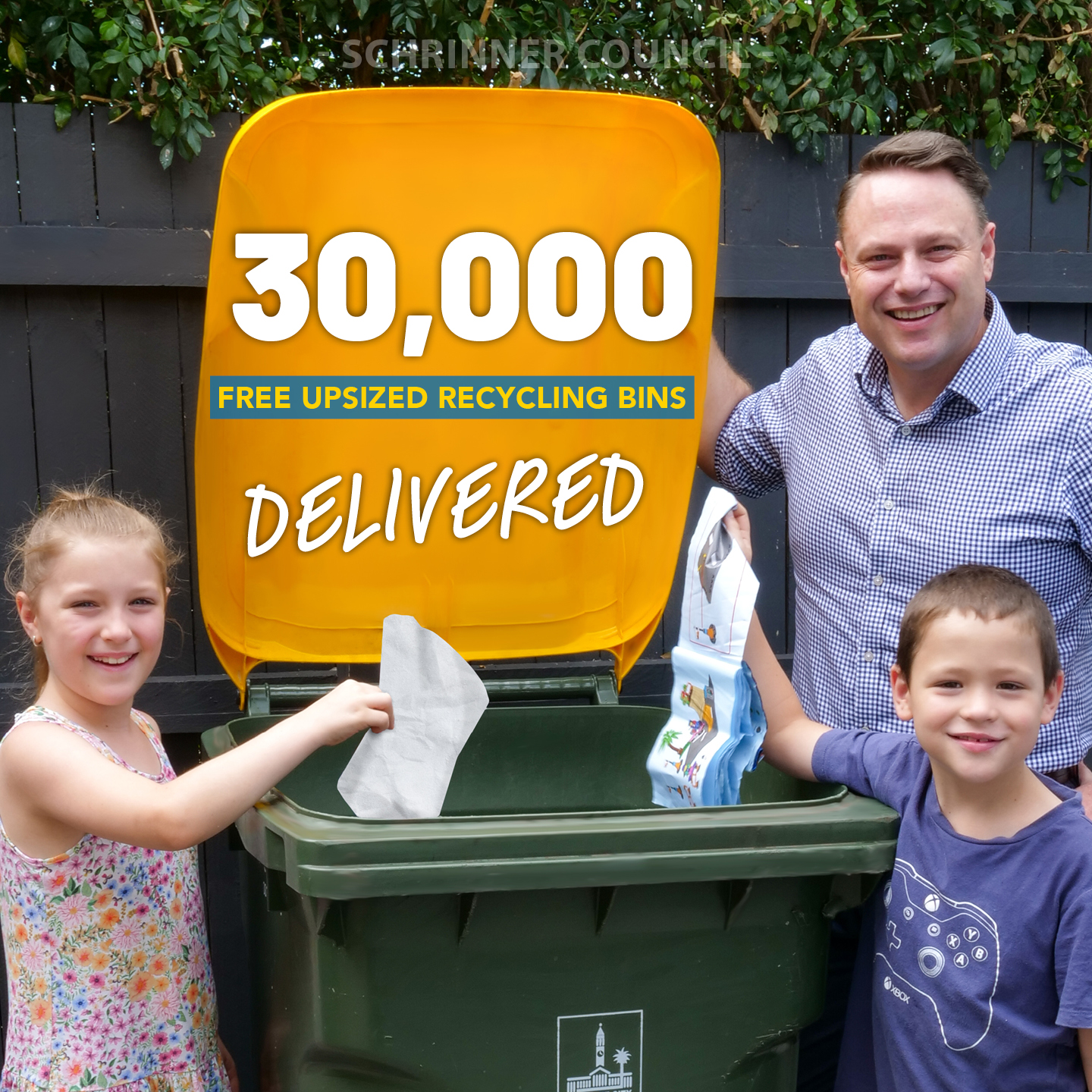 More than 1650 free bigger recycling bins are being delivered to Brisbane residents every month after the Schrinner Council waived the $30 fee.

Lord Mayor Adrian Schrinner said the removal of the establishment fee in July 2020 had been extraordinarily successful with the 30,000th large recycling bin delivered recently to a household in Parkinson.

“We removed this fee to encourage more people to take up the option of getting one of our larger yellow-top bins and the response has well and truly exceeded our expectations,” Cr Schrinner said.

“Not only has this decision saved households $900,000 in fees, it has helped people recycle more which leads to less material ending up in landfill.”

The larger yellow-top bins are 360L, rather than the traditional 240L, and Brisbane residents were previously charged $30 to exchange their old bin for the larger size.

In July 2020, the Schrinner Council announced the fee would be removed to encourage households that regularly fill their yellow-top bin before the end of the fortnightly collection period to take up this option.

“We have just started the new year and we have already reached the significant milestone of delivering our 30,000th free bigger recycling bin,” Cr Schrinner said.

“This is a fantastic achievement and shows how Brisbane residents are prioritising recycling and making sure their household waste goes into the correct bin.

“In 2020/21, 71,666 tonnes of household recyclable materials were saved from going into landfill.

“After such fantastic response, we’ll continue to waive the one-off fee to encourage more people to get behind our mission to create a clean and green city.”

Cr Schrinner urged residents who have the standard bin to assess whether a larger recycling bin could benefit their household too.

“Over the past 10 years, there’s been a 40 per cent decrease in the volume of recyclables being placed into the general waste stream but there’s still more work to be done,” he said.

“In 2020/21 more than 15 per cent of items were incorrectly placed in household rubbish bins that could have been recycled.

“Paper items such as magazines, cardboard and newspapers accounted for more than half of the waste that could have been recycled.”

The Schrinner Council has also just announced the upcoming March launch of a food waste recycling pilot for 6000 households across 30 suburbs.

“The food waste recycling pilot diverts food waste out of the general waste bin and into the green bin which is a critical step towards a city-wide scheme which has the potential to prevent up to 100,000 tonnes of food waste from going to landfill each year.

“Brisbane is a clean, green and sustainable city and this pilot program is another step we’re taking to support our environment.”