I am proud to announce my support for the Pride Business Network’s first iteration of the New Farm Queer Film Festival which takes place October 20-27, 2022.

Having celebrated one hundred years as a cinema in 2021, the film festival takes place in a theatre that has a long history of screening queer interest films & film festivals; New Farm Six Cinemas – 701 Brunswick Street.

The festival kicks off with the Red Carpet Opening Night screening of the French comedy-drama The Divide (La Fracture), the QLD Premiere of the acclaimed Cannes Competition title. Champagne on arrival at 6 PM for a 6:30 PM screening.

Our Centrepiece Screening is QLD Premiere of the twisted and surreal comedy Please Baby Please! from director Amanda Kramer, a psychosexual riff on the works of John Waters and Kenneth Anger. Dress-up is encouraged for this sexy and wicked leather costumed film.

NFQFF closes with a Gala Screening of Bros, the brand new rom-com from Judd Apatow, fresh from the 2022 Toronto International Film Festival. Champagne is included with each ticket. 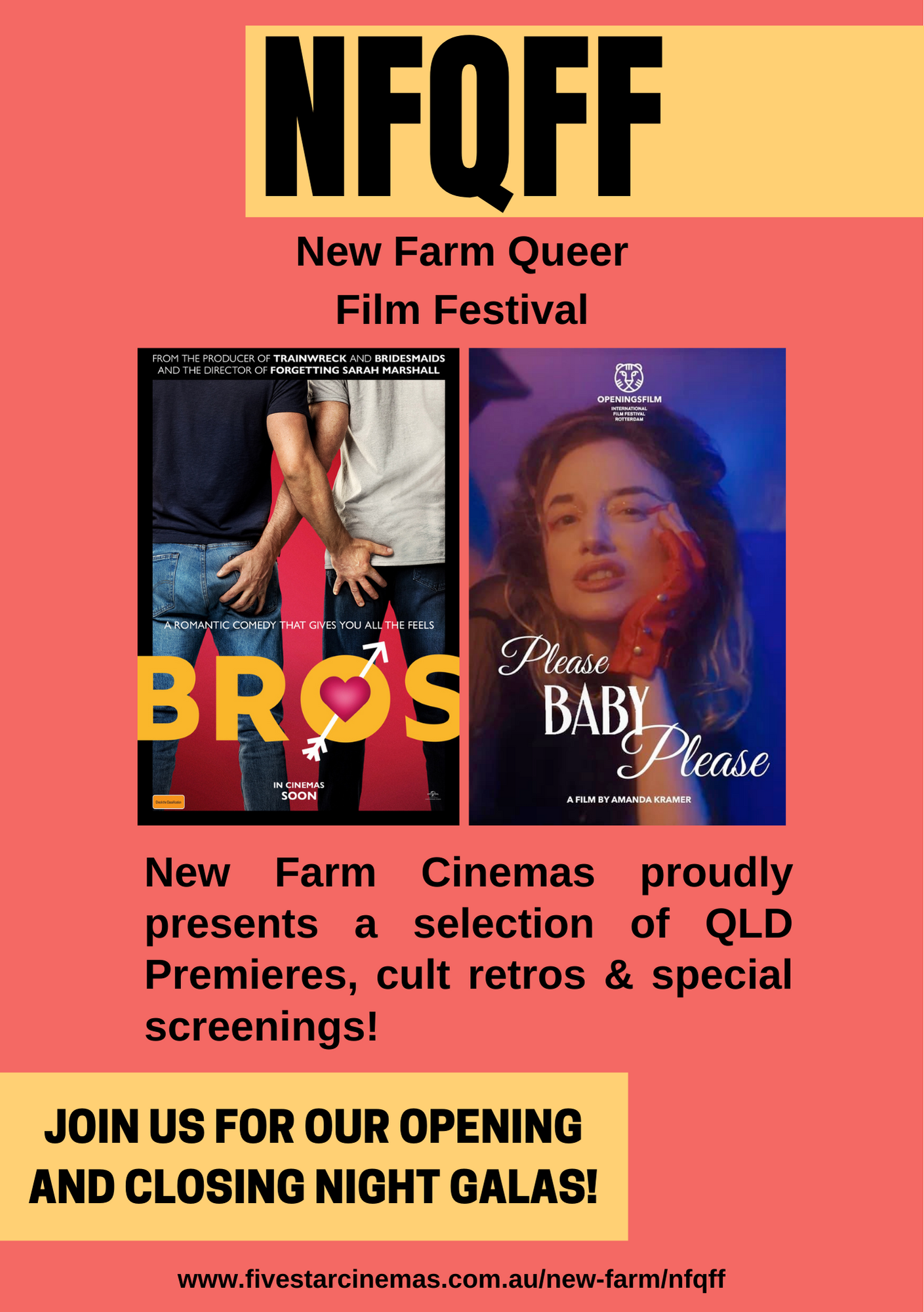 Winner of the Queer Palm at Cannes 2021, this hilarious drama explores love under stress. A lesbian couple on the verge of breaking up find themselves in an emergency ward bordering on collapse on the evening of a Parisian Yellow Vest protest. Their encounter with Yann, an angry and injured demonstrator, will shatter each person’s certainties and prejudices. Outside, the tension escalates. French with Eng subtitles, 98 minutes

World Premiering at SXSW, this dark Aussie horror is packed with social commentary and witty cynicism. Cecilia is a successful social media influencer living the dream, until she runs into her ex-childhood best friend and is invited away on her bachelorette weekend. Suddenly Sissy finds herself stuck in a remote cabin with her school bully…and a taste for revenge. 102 minutes

Oct 23, 4:30PM: The Most Beautiful Boy in the World QLD Premiere

On March 1, 1971, Luchino Visconti’s Death in Venice (1971) had its world premiere in London in the presence of Her Majesty The Queen Elizabeth II and her daughter, Princess Anne. It was there that the Italian director proclaimed his Tadzio as the world’s most beautiful boy. Fifty years later, that heavy shadow still weighs upon Swedish actor Björn Andrésen, the then 15-year-old star who embodied the legendary Tadzio, who takes us on a memory-laden journey of cinema history, tragedy, and second chances. Various languages with Eng subtitles 93 minutes

Fresh from its Australian Premiere at the Sydney Film Festival, Craig Boreham’s Sydney set feature film explores the cultural clash of two young men. Casey, a country lad running from a small-town scandal, finds himself down and out in big city Sydney. When he meets city lad Tib both men find something they have been missing but neither of them knows quite how to negotiate it. 95 minutes

Don your Kenneth Anger leather jacket and attend our festival centrepiece screening, dress up is encouraged!

Newlyweds Suze and Arthur become the dangerous obsession of a greaser gang that awakens a sleeping quandary about the couple’s sexual identity after witnessing a murder in the gritty streets of a surreal 1950s Manhattan. Andrea Riseborough, Harry Melling, Demi Moore & Karl Glusman star. 95 minutes

Anaïs is thirty and broke. She has a lover, but she’s not sure she loves him anymore. She meets Daniel, who immediately falls for her. But Daniel lives with Émilie – whom Anaïs also falls for. This is the story of a restless young woman. And the story of a profound desire. French with Eng subtitles, 120 minutes

Two drag queens and a transgender woman contract to perform a drag show at a resort in Alice Springs, a town in the remote Australian desert. As they head west from Sydney aboard their lavender bus, Priscilla, the three friends come to the forefront of a comedy of errors, encountering a number of strange characters, as well as incidents of homophobia, whilst widening comfort zones and finding new horizons. 104 minutes 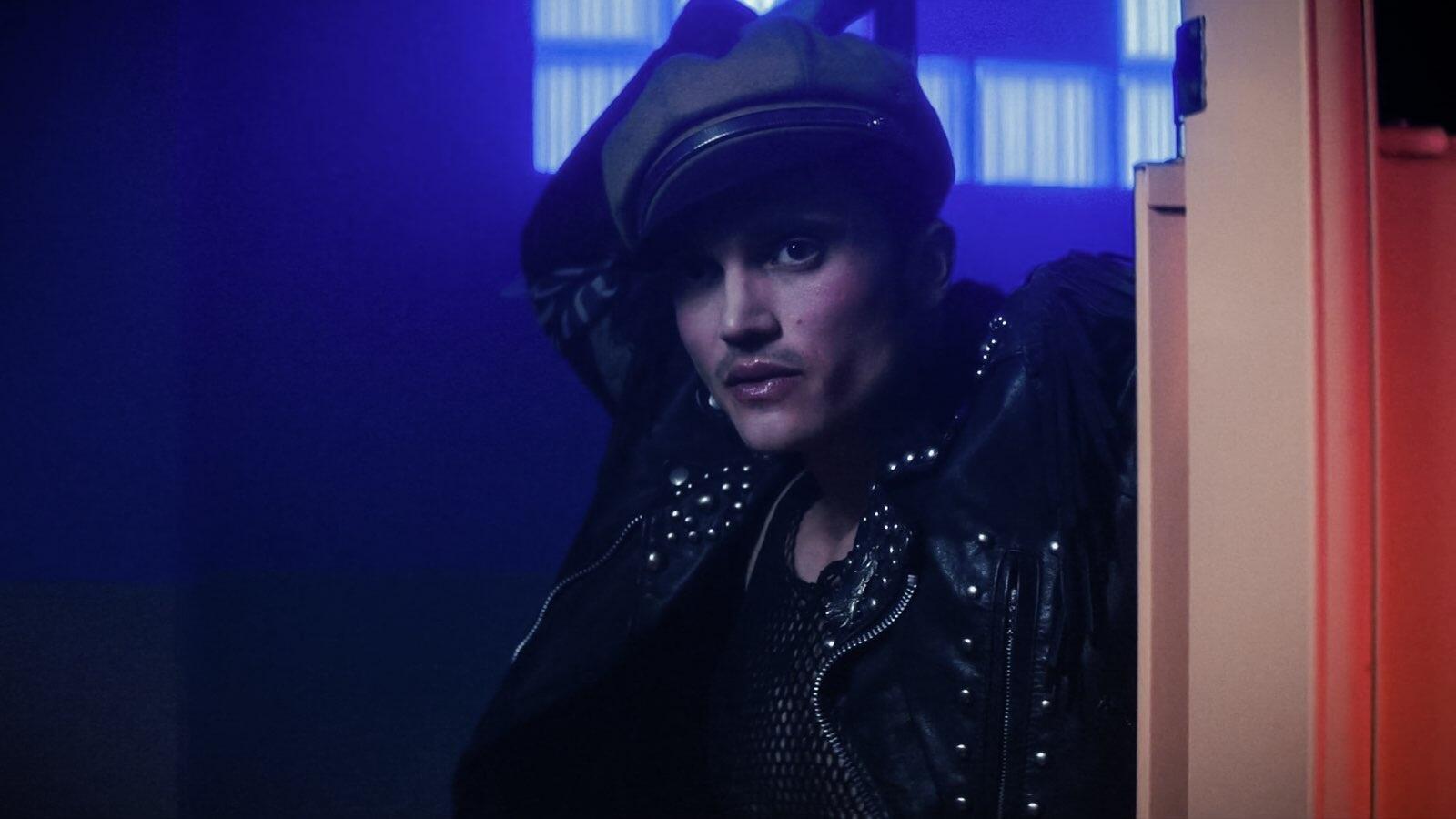